If you are one of our newsletter and blog followers, you must be aware of our Sponsor A Girl Campaign. Well, on the 25th,  we had our 2ndcampaign and it was a huge success!

Numerous studies suggest that about 20% of girls in India drop out of school by the time they attain puberty, one of the main reasons being inadequate infrastructure, lack of awareness about menstrual hygiene and the stigma attached to it. Our Sponsor A Girl campaign attempts to equip young girls with knowledge about their period, including proper disposal and sanitary practices. This being the second campaign of its kind conducted at Myna included girls from around Mankhurd and Govandi slums who came in large numbers, some accompanied by mothers and friends.

The session began with Mission SanScar’s Sumati Joshi asking the girls if they knew why menstruation occurs, to which none responded (mothers included). This was shocking considering most of them are between the ages of 13-21 and had begun menstruating.

An icebreaker that left everyone smiling…and hungry. Watch here

We engaged these girls in a hands-on experiment to test the absorbency of Myna pads by pouring red-coloured water on them. This experiment demonstrated how much water, or period blood, the gel in our pads can absorb – a full cup’s worth! Sumati also spoke to the girls about anaemia, highlighting preventative measures like eating green, leafy vegetables and dates. Studies have shown that a majority of Indian women, between the ages of 15-49 are anaemic and correlations have been drawn with poverty, caste and poor sanitation. This session was a collaborative effort with Doctor’s For You who provided free blood tests to these women to check their haemoglobin count and prescribe free treatment to anaemic girls.

Our very own Uzma getting her haemoglobin count checked by a Doctor’s For You representative.

After explaining why menstruation takes place, Sumati moved on to discuss how our bodies are our sole property, and no one has the authority to violate it. Given the current climate, it is important to educate girls at a young age about good v/s bad touch, especially those living in such close proximity to each other, where privacy is a luxury.

The session concluded with a pad decorating activity where everyone could decorate pads with sequins and glitter. This was done to demystify pads and get the girls to see them as something not to be ashamed of.  Periods and pads don’t have to be taboo and spoken about in hushed tones. They decorated the pads with all sorts of brilliant designs! 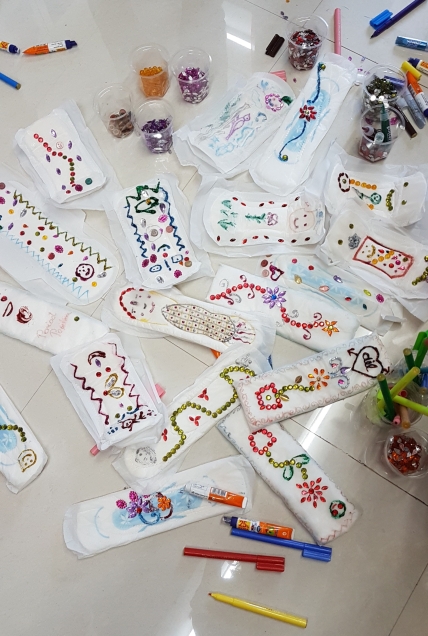 The decorated pads made by the girls.

*All of the pads used in the decoration were damaged in some way and could not be sold by Myna. We are against wasting sanitary napkins.

We would like to thank all our donors and sponsors for their continuous support. If you’d like to sponsor a girl with a Myna Menstrual Kit, click here.

This Sponsor A Girl campaign was a collaborative effort with Myna Mahila Foundation, Mission SanScar and Doctor’s For You. We thank them both for their support in making the event a success!

Portuguese, feminist and in love with India. I think that if you know this you already get a big part of who I am. I am also an Exchange student from Sciences Po Paris at Tata Institute of Social Sciences and a part of Myna Family since July.

Myna is a social entreprise that manufactures as well as distributes  menstrual products at the doorstep of the most vulnerable women.

At Myna, we empower women to speak about issues they are most afraid to say aloud.

French girl in love with India! Sciences Po student currently based in Mumbai as an exchange student at the Tata Insitute of Social Sciences! Working with the incredible Myna family, and learning so much every day!